Researchers have discovered a 3D structure that divides space into 24 regions, and have shown that it is the best solution yet to a modified version of a geometrical space-partitioning problem that has challenged researchers for more than a century. In 1887, Lord Kelvin asked how space could be partitioned into 3D structures of equal volume in a way that minimises the total surface area of each structure.

It must be possible to tightly pack many of these structures together with no gaps in between them—in other words, they must be "space-filling" structures. Each structure can take on a variety of complex 3D shapes, or "polyhedra," either as a single polyhedron or a combination of multiple smaller polyhedra of various types. The challenge is to figure out what particular types of polyhedra to use in order to minimise the outer surface area of the entire structure.

Kelvin's best solution to this problem was a single polyhedron called a "tetrakaidecahedron," which has 14 faces: six squares and eight hexagons. Since this is the shape obtained when cutting the corners off a 3D diamond shape, it can also be thought of as a truncated octahedron.

Although Kelvin's solution stood for more than a century, in 1994 Denis Weaire and Robert Phelan at Trinity College Dublin used numerical simulations to discover a more optimal space partition.

Weaire and Phelan's solution is made of eight polyhedra of two different types, though both types have the same volume: six of Kelvin's tetrakaidecahedron and two dodecahedron (which has 12 faces).

Together, these eight polyhedra make up a 3D structure that has 0.3% less surface area than Kelvin's single tetrakaidecahedron. The Weaire-Phelan structure has remained the most optimal solution to Kelvin's problem for the past 22 years.

Now in the new study, physicists Eric Opsomer and Nicolas Vandewalle at the University of Liége in Belgium have developed a new algorithm for finding space-filling composite polyhedral structures with minimal surface area.

Using the new method, they discovered that a novel 3D structure made of 24 polyhedra has an even lower surface area than the Weaire-Phelan structure. The 24 polyhedra are of two different types: some have 12 faces and some have 16 faces.

Unlike the Weaire-Phelan structure, in which the two different types of polyhedra have equal volumes, the 12- and 16-faced polyhedra here have significantly different volumes. For this reason, the new structure doesn't satisfy Kelvin's original requirement for equal volumes. 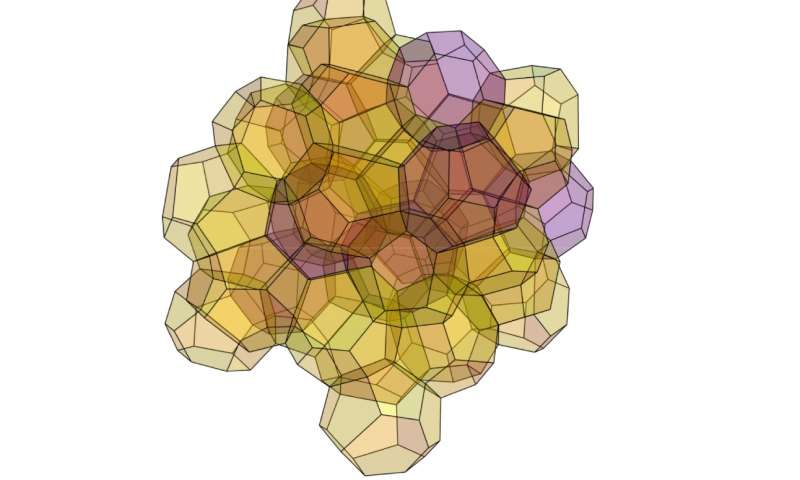 "Unfortunately, it is not a 'true solution,' since equal volume cells are a requirement for the original Kelvin problem," Opsomer told Phys.org. Nonetheless, the structure is still interesting for other reasons. "These results may lead to the discovery of structures with potential implications for material physics, medical research, and other areas," Opsomer said.

As the researchers explained, they intentionally removed the equal volumes constraint when developing their search method because it allowed them to design the algorithm in a new way: instead of directly minimising the surface area of a structure, they maximised the polyhedra's average isoperimeters (the perimeters shared by all adjacent polyhedra). While these two approaches are different, they are ultimately equivalent.

The researchers used the new algorithm to explore several 3D structures made of between two and 64 polyhedra. Starting with a specific number of randomly arranged points in 3D space, the algorithm begins to move the points around.

After each iteration, the algorithm calculates the new average isoperimeter, and based on the result either keeps or rejects the new configuration with a certain probability. After millions and sometimes billions of iterations, the points eventually form the vertices of multiple polyhedra that together form a 3D structure with very low surface area.

As there is currently no way to prove what the most optimal space-partitioning structure is (with or without equal-volume cells), the researchers plan to continue searching a wide variety of structures of all types. Their best guess is that even more optimal structures exist, and they plan to use their algorithm to continue their exploration.

The researchers also expect that the algorithm could generate other unique structures. One particularly interesting structure they discovered here is a 40-polyhedra structure that is more optimal than Kelvin's structure but not quite as good as the Weaire-Phelan structure.

This highly complex structure is also unusual in that it doesn't belong to a category of structures called Frank-Kasper structures, which researchers have traditionally focused on for optimal space partitioning. The finding suggests that other optimal structures may also exist outside of this category.

Although Kelvin's problem wasn't originally proposed to meet any practical need, optimal space partitioning now has a variety of applications. In the medical field, these concepts have been used to design strong, lightweight bone tissue replacements.

Optimal space partitioning has also inspired architecture, with one notable example being the swimming venue built for the 2008 Beijing Olympics. The building, which is called the Water Cube, is based on the Weaire-Phelan structure.